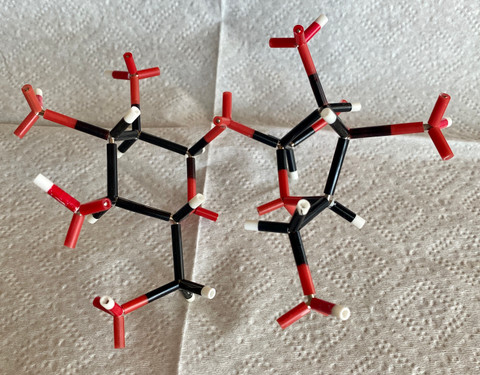 Hover over image to zoom

This is a framework molecular model kit of the sugar Sucrose.  This is part of our new line of MicroMolecules that are one half the scale of our regular framework molecular models at 0.5 inch per 1 Angstrom. The finished molecule literally fits in the palm of your hand.  No assembly required. Stay tuned for the release of all of the amino acids and other series soon to come.

Sucrose, a disaccharide, is a sugar composed of glucose and fructose subunits. It is produced naturally in plants and is the main constituent of white sugar. It has the molecular formula C12H22O11.

For human consumption, sucrose is extracted and refined from either sugarcane or sugar beet. Sugar mills – typically located in tropical regions near where sugarcane is grown – crush the cane and produce raw sugar which is shipped to other factories for refining into pure sucrose. Sugar beet factories are located in temperate climates where the beet is grown, and process the beets directly into refined sugar. The sugar-refining process involves washing the raw sugar crystals before dissolving them into a sugar syrup which is filtered and then passed over carbon to remove any residual colour. The sugar syrup is then concentrated by boiling under a vacuum and crystallized as the final purification process to produce crystals of pure sucrose that are clear, odorless, and sweet.

Sugar is often an added ingredient in food production and recipes. About 185 million tonnes of sugar were produced worldwide in 2017

Sucrose is particularly dangerous as a risk factor for tooth decay because Streptococcus mutansbacteria convert it into a sticky, extracellular, dextran-based polysaccharide that allows them to cohere, forming plaque. Sucrose is the only sugar that bacteria can use to form this sticky polysaccharide.

In nature, sucrose is present in many plants, and in particular their roots, fruits and nectars, because it serves as a way to store energy, primarily from photosynthesis.[16][17] Many mammals, birds, insects and bacteria accumulate and feed on the sucrose in plants and for some it is their main food source. Although honeybees consume sucrose, the honey they produce consists primarily of fructose and glucose, with only trace amounts of sucrose.

CAUTION: THESE MOLECULES CONTAIN MANY SMALL PARTS NOT SUITABLE FOR CHILDREN UNDER 5 YEARS OF AGE.

This product hasn't received any reviews yet. Be the first to review this product!

All prices are in USD