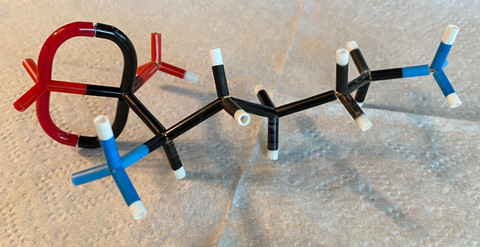 Hover over image to zoom

This is a framework molecular model kit of the Amino Acid Lysine  This is part of our new line of MicroMolecules that are one half the scale of our regular framework molecular models at 0.5 inch per 1 Angstrom. The finished molecule literally fits in the palm of your hand.  No assembly required. Stay tuned for the release of all of the amino acids and other series soon to come.

Lysine is an α-amino acid that is a precursor to many proteins.  The human body cannot synthesize lysine. It is essential in humans and must therefore be obtained from the diet.  Lysine plays several roles in humans, most importantly proteinogenesis, but also in the crosslinking of collagen polypeptides, uptake of essential mineral nutrients, and in the production of carnitine, which is key in fatty acid metabolism.  Due to its importance in several biological processes, a lack of lysine can lead to several disease states including defective connective tissues, impaired fatty acid metabolism, anaemia, and systemic protein-energy deficiency. In contrast, an overabundance of lysine, caused by ineffective catabolism, can cause severe neurological disorders

Good sources of lysine are high-protein foods such as eggs, meat (specifically red meat, lamb, pork, and poultry), soy, beans and peas, cheese (particularly Parmesan), and certain fish (such as cod and sardines).[58] Lysine is the limiting amino acid (the essential amino acid found in the smallest quantity in the particular foodstuff) in most cereal grains, but is plentiful in most pulses (legumes).[59] Beans contain the lysine that maizelacks, and in the human archeological record beans and maize often appear together, as in the Three Sisters: beans, maize, and squash.

CAUTION: THESE MOLECULES CONTAIN MANY SMALL PARTS NOT SUITABLE FOR CHILDREN UNDER 5 YEARS OF AGE.

This product hasn't received any reviews yet. Be the first to review this product!

All prices are in USD